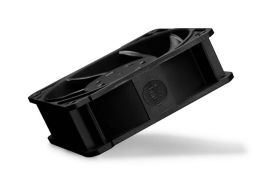 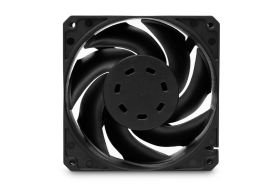 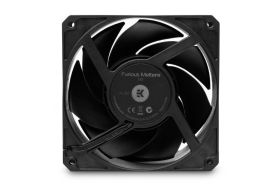 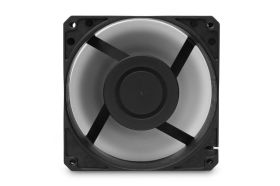 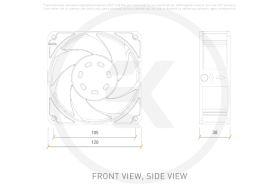 The EK-Furious Meltemi 120 is the most extreme EK fan up to date. This 38mm thick extreme high-static pressure radiator cooling fan is designed purely for highest-performance computer liquid cooling systems. Developed in-house on the basis of the renowned EK-Vardar fans, they have a wide PWM range of operation and the highest speed of up to 3500 RPM. Due to a 38mm thick frame, there is space for an upgraded motor and far superior performance compared to any standard 25mm thick fan at the same RPM range.

The best possible performance of the EK-Furious Meltemi 120 fan is achieved in pull mode. Such a regime evens out the airflow through the entire surface of the radiator since the motor hub dead zone effect is lessened. The fan is equipped with a red sleeved cable just to warn off those curious little fingers from getting hurt. Seriously, 3500 RPM is no joke, and you should be extra careful around these fans if they are in operation.

The Meltemi family of cooling fans carries the name of a type of strong, dry northern winds of the Aegean Sea. The name Meltemi is derived from Italian mal tempo meaning "bad weather", while we can say that the EK-Meltemi is "bad news" for high temperatures.

The key characteristics of EK-Furious Meltemi fans are:

Sealed-edge fan casing - The classic, yet the effective square shape of the fan casing provides optimal performance in either pull - (suction) or push (pressure) regime without hydraulic losses, thus ensuring the optimal cooling capacity of your liquid cooling radiators. The classic shape of the fan frame also allows easy cable routing while grouping more fans on one radiator. For the best performance, EK recommends using the EK-Furious Meltemi 120ER in pull mode.

Robust design - The EK-Furious Meltemi fans fit subtly into any liquid cooling computer giving it an industrial look based on quality and performance.