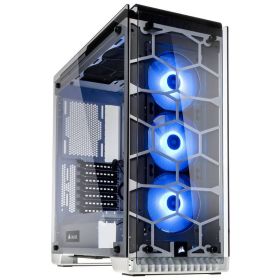 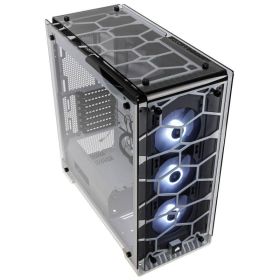 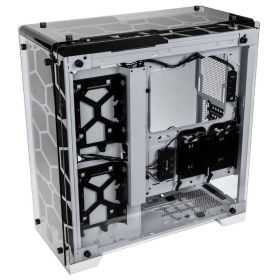 The Corsair Crystal 570X RGB is a striking midi tower with stylish lighting, which is equipped with four tinted tempered glass windows and a tidy interior. The black and red housing offers space for ATX motherboards and enables the installation of a total of four hard drives, two of which are 3.5-inch and two in 2.5-inch format. Three 120 millimeter fans with RGB lighting are already pre-installed in the front and, in addition to a decent airflow, also provide absolutely unique lighting for the entire housing. All in all, the Crystal 570X RGB can convince in terms of optics and functionality and is therefore a good choice for the next gaming system!

The Corsair Crystal 570X RGB Midi-Tower at a glance:

Tidy interior with plenty of space for gaming hardware

In addition to the possibility of installing a motherboard up to an ATX form factor, the tidy interior of the Crystal 570X RGB offers enough space for further gaming hardware. A total of four hard drives can be installed, two 3.5-inch and two 2.5-inch data carriers can be mounted on the back of the mainboard tray completely without tools.

With regard to the largest main components of a gaming PC, the Crystal 570X RGB offers space for graphics cards up to 370 millimeters in length, power supplies up to 225 millimeters in length and CPU coolers up to 170 millimeters in height. The large cut-out in the mainboard tray enables the CPU cooler to be easily assembled or disassembled and thus saves a lot of frustration. In addition, there are a total of ten recesses in the interior of the midi tower, all of which can be used for optimal cable management.

The pre-installed dust filters offer optimal protection against dirt in the hardware and are very easy to remove for cleaning.

The specialty of the Crystal 570X RGB lies in the three pre-installed RGB-LED fans in 120-millimeter format, all of which are located in the front and have LEDs in the rotor. Due to the extremely extensive range of functions of the fans, they not only enable simple lighting in different colors, but also have various effects that make the entire housing including the built-in hardware an absolute highlight. If necessary, this air cooling can even be supplemented by two additional fans in the lid and one on the rear.

When designing their towers, the Corsair developers are clearly relying on a timeless and elegant design, which can undoubtedly be described as tidy, but which does not dispense with extraordinary details and pointed accents. This exciting balancing act between style and traditional elegance also succeeds with the Crystal 570X RGB with astonishing ease, which has a lot in common with the Carbide 400C in terms of design and layout.

The black and white Corsair Crystal 570X RGB Midi-Tower has a noble look made of solid steel, which is complemented by two tinted tempered glass windows, one on the side and one on the front. The front is particularly noticeable, with a coarse-meshed honeycomb look behind the glass and comes into its own thanks to the three pre-installed 120-millimeter fans with RGB-LED lighting.

The housing's I / O panel is located in the lid and has a total of two audio connections, a power and reset button, a status LED, two USB ports in 3.0 standard and a practical LED control.