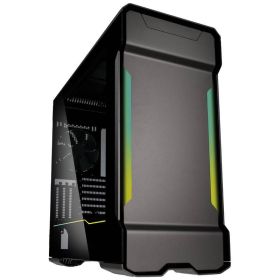 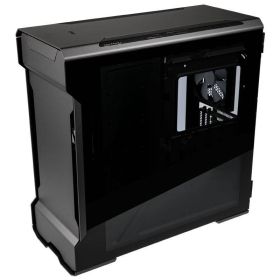 The Phanteks Evolv X is a premium Mid-Tower case built from a combination of anodized aluminium and powder coated steel. It has a range of features targeted at gaming enthusiasts and professionals. These include easy to install components, advanced options for cooling and even the ability to install a second ITX motherboard in the case's roof (ITX kit sold separately)

The Phanteks Evolv X will be the centerpiece of your home or office, coming in an attractive range of colours: Satin Black, Gunmetal Grey and Galaxy Silver.

THE PHANTEKS EVOLV X AT A GLANCE:
Built from high-quality materials
Designed for dual Motherboard configurations
Tinted left and right tempered glass side panels
Compatible with Asus Aura sync and MSI Mystic Light Sync
THE PHANTEKS EVOLV X IN DETAIL:
The Phanteks Evolv X is a stylish Mid-Tower case that can hold up to an E-ATX motherboard. It has multiple sophisticated features for those who are passionate about hardware. For example, with the appropriate bracket and Phanteks power supply, an ITX motherboard can be mounted to the roof of the Evolv X. This makes the case ideal for complex tasks that require dual systems such as server management and live streaming.

AN EYE-CATCHING CASE MADE FROM HIGH QUALITY MATERIALS
With the Evolv X, Phanteks have created a visually impressive case for enthusiasts. They have achieved this by combining premium materials, such as sandblasted aluminium and powder coated steel, with well thought out design elements.

The case features two tempered glass side panels which allows users to display the core build components. The side panels can also be easily attached and removed via an ingenious magnetic hinge system that suspends the panels securely in place. Aluminium handles on both side panels allow you to open them without any unsightly fingerprints. They can even be secured behind the front panel using thumbscrews, which is ideal for LAN events & transporting your system.

In addition, the case has a distinct front panel featuring rugged styling and excellent thermal properties. A 30mm clearance between the front panel and chassis ensure great airflow, which is further enhanced by the front panel's large surface area and mesh sections to prevent dust entry. The top panel features mesh vents on both sides, and an airflow cover is supplied to prevent air recirculation when the top exhaust area is not fully occupied. This adds up to a significantly better airflow experience than the original Evolv ATX Glass edition.

A Universal fan hub has been include which lets you to control all the fans within the case and Phanteks have even bundled three 140mm Phanteks Premium fans, which are based on the MP model.

EXTENSIVE STORAGE AND CONNECTIVITY SOLUTIONS
A striking feature of the Phanteks Evolv X is that it is capable of holding up to 9 SSD and 10 HDDs. 6 x SSD and 4 x HDD mounts are included as standard. Not only that, they can be discreetly tucked away into panels that fold out from the case's right side. There are additional panels that are tool-lessly mounted inside the case to conceal unsightly cables, along with dual lane cable routing options and sliding covers at the front side of the Evolv X, ensuring a clean system with minimal effort.

RGB Illumination is great as you would come to expect from Phanteks. There are a pair of digital RGB strips on the front panel featuring wireless connectivity, meaning the front panel can be removed without any cables needing to be disconnected. There is also a digital RGB light strip featured on the PSU shroud. Coming with compatibility for both Asus's Aura Sync and MSI's Mystic Light Sync, the case also has I/O panel that includes a USB 3.1 Type-C port, two USB 3.0 power button, audio jacks, and buttons to switch between illumination settings. There is even a GPU anti-sag bracket included to keep your VGA card straight without spoiling the clean aesthetics of your build.