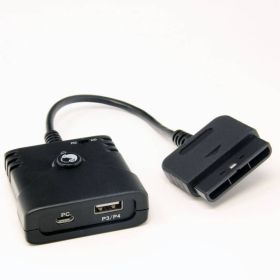 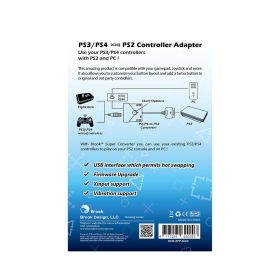 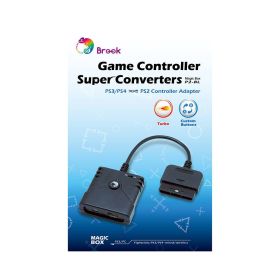 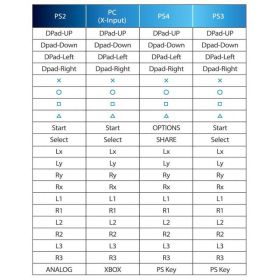 This converter allows you to use your PS3/PS4 Controller or Arcade stick on a PS2 System.

This not only saves you money but also means that you can use the controllers you have grown accustomed to on your favorite old PS2 games. Installation and use of the PS3/PS4 to PS2 Controller Adapter is effortless.

NOTE: It is recommended that you confirm that the latest firmware is installed on your device by visiting the Brook Device Support page, downloading the firmware update app, and following instructions in the manual.

PS3/PS4 WIRED AND WIRELESS CONTROL
The included USB A port on the PS3/PS4 to PS2 Super Converter's main body will accept most wired gamepads and arcade sticks.
For those who prefer wireless control - something not as common to PS2 owners at the time - you can connect your modern controller to the Super Converter via Bluetooth.
See instructions in the manual to initiate a wireless connection.

VIBRATION SUPPORT
There were hundreds of titles on Playstation 2 that utilized vibration for special effects during gameplay.
You can have the same experience on any supported PS3/PS4 gamepads thanks to the Super Converter's vibration support.

PC-COMPATIBLE
For those who often play on PC, the PS3/PS4 to PS2 Super Converter features a mini USB output.
You can connect a mini USB cable to your computer and utilize the converter's Xinput support to control modern titles.
Additionally the PC connection is used to upgrade firmware when necessary.

- Accepts FightSticks, wired Playstation 3/4 gamepads, and steering wheels amongst other original and 3rd party PS3/4 compatible peripherals.
- Switch between PS2 and Xinput (PC) mode via switch.
- Supports mapping a single or combination of buttons to a Turbo function for rapid fire play.
- Ability to hot-swap peripherals without unplugging the device from the console.
- Vibration support when used on PS2 console.

In addition, the Brook Super Converter is firmware upgradeable, which can be used to improve functionality, and add new features.
Firmware updates are performed by attaching your device to a Windows PC, or Mac with Boot Camp partition or Parallels Virtual PC software.

WHAT'S INCLUDED
The Brook Super Converter comes in its own professionally designed box.
In the box is the device; paper instructions are also included in English and Taiwanese.
You can also download the instructions as a PDF from Brook website.