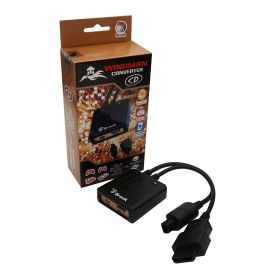 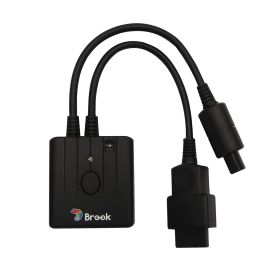 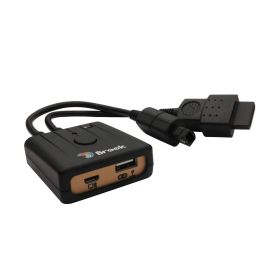 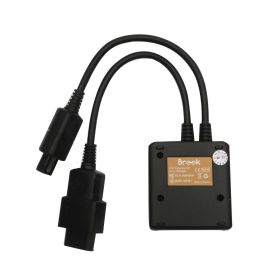 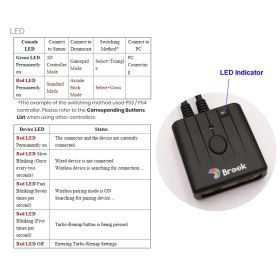 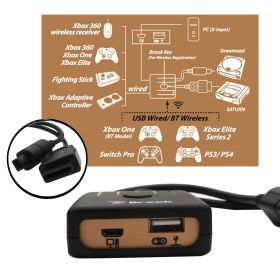 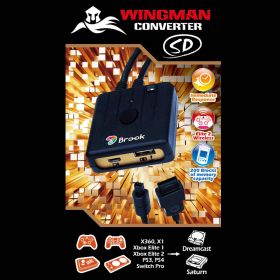 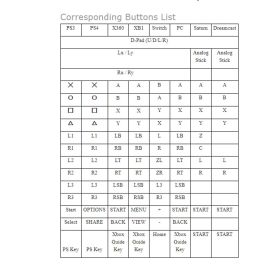 200 MEMORY BLOCK CAPACITY FOR SEGA DREAMCAST
An early omission from the previous Brook Dreamcast Super Converter was support for dreamcast memory blocks.  A firmware update allowed that version to support 40 blocks of memory.  The Wingman now supports a significant 200 blocks of memory, which matches the Dreamcast original VMU memory size.

FULL-FEATURED, FIRMWARE UPGRADEABLE
The Brook Super Converter has several convenient features to improve the control experience.
* Accepts FightSticks, wired and wireless gamepads and fightsticks across Xbox and Playstation, plus bluetooth support for Nintendo Switch Pro Controller.
* Use the Brook logo button at top of device to register for wireless play.
* Supports mapping a single or combination of buttons to a Turbo function for rapid fire play.
* Ability to hot-swap peripherals without unplugging the device from the console.
* Vibration and Turbo support.
* Mappable buttons from peripheral to Dreamcast control
* X-Input support
In addition, the Brook Super Converter is firmware upgradeable, which can be used to improve functionality, and add new features.  Firmware updates are performed by attaching your device to a Windows PC, or Mac (when applicable).

TOURNAMENT ACCEPTANCE
As of now, the Brook Super Converter and Wingman series are allowed by EVO, one of the most popular global tournament events.  Often EVO's policies are adopted at smaller tournaments. This policy is a tentative acceptance - should the converter become disabled via Sony firmware update before EVO, it could face a ban.

OVERVIEW
- Includes 200 blocks of DC memory
- Hot swapping. Auto-register controllers. Optimal button mapping.
- Support vibration and turbo function.
- Firmware upgradable. Please check the compatibility of the product at the brook official web site before you place the order because NOT all the brand or models of the controllers / wheel / Joystick are compatible with the brook adapter.

IMPORTANT:
- Each Wingman SD can only connect to a single Xbox 360 / Xbox One / PS3 / PS4 / Switch device. Wingman SD supports most of the accessories that are compatible with original factory specifications. To expand the number of supported accessories, firmware will be updated irregularly.
- Wingman SD do not support headset/microphone function which provides by controller audio jack.
- Wireless connection records between an Xbox One wireless controller (with Bluetooth function)/Xbox One Series 2 and the Wingman SD will be erased if a wired connection is used. Wireless connection re-pairing will be required if wireless connection is used.
- If Xbox One Elite Series 2 controller is used, please turn off controller profile settings to prevent interference with Wingman SD's Turbo or Remap settings. As Xbox One Elite Series 1 controller is incapable of turning off profile settings, using Xbox One Elite Series 1 controller might result in Remap function overlapping.
- Using PS3 / PS4 / Switch Pro wireless controller, you have to connect like wired controller via USB first and then remove the cable.
- Some devices with high power consumption, such as the Switch Pro controller, require an external USB power source for normal use.
- Please check the compatibility of the product at the brook official web site before you place the order because NOT all the brand or models of the controllers / wheel / Joystick are compatible with the brook adapter.