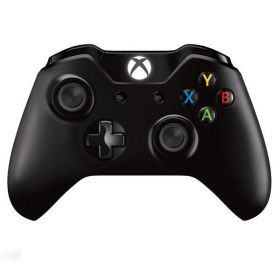 The original Xbox controller from Microsoft in the redesigned One version with a comfortable wireless connection.

A legendary predecessor has the Xbox One Controller already, and this classic is no longer a word to be imagined because with the 360 ​​controller, Microsoft has created an extremely popular and nearly perfect input device that has now been reworked in detail resulting in precision on a new one Level. Here is the black cordless version.

Ergonomics, which was considered as ideal, were improved once again, and the tax counters and ministicks were redesigned. Furthermore, the controller is extremely robust and therefore can handle actions that arise during "emotional situations". Thanks to the two easy-to-use and handy analog sticks as well as shoulder buttons, the revised digital control cross and the nine additional buttons, each game can be controlled with the Xbox-One-Pad.

The built-in vibration motors give a noticeable feedback in compatible games, which enhances precision, near-realism and playability. The version of the Xbox-One controller offered here is based on a wireless signal transmission. This allows the Xbox One to be controlled completely wirelessly from a range of up to 9 meters and requires only two AA batteries included in the controller as a power supply.