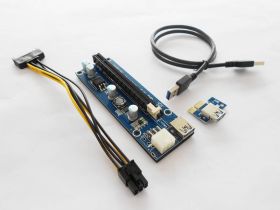 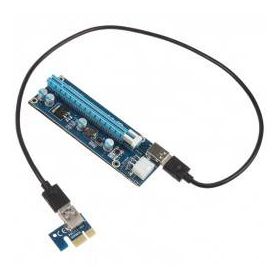 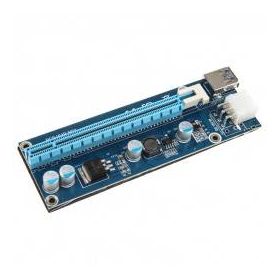 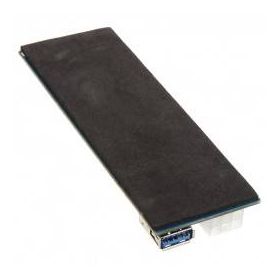 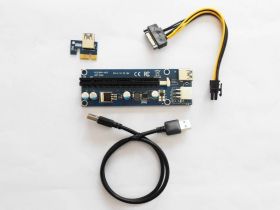 This PCI-Express x1 to x16 powered riser card with additional 6-pin PCIe power connector is the ideal accessory for bitcoin mining systems and can, of course, take into account the requirements set out here Bandwidth, can also be used for other systems and applications, such as Altcoin, Ethereum, Ether, Zcash, Distributed Computing, Rendering and Boinc. Bitcoin is a virtual pay-as-you-go payment tool launched and managed by all the participating Bitcoin network clients. Like many other cryptos with a proof-of-work principle, bitcoins are generated by computer-solved, cryptographic computing tasks with high energy expenditure, which is called "mining" (mining).

In principle, normal computer processors (CPUs) are capable of calculating new bitcoins, but they can only calculate a few (kilo) hashes per second and therefore are not suitable for bitcoin mines in relation to the time and energy used for this purpose. Regarding efficiency, they are clearly marked by graphics processors (GPUs), especially graphics chips of the Radeon series from AMD have proved particularly strong. As so-called mining rigs, PC systems are referred to as commercially-available hardware components, the only task of which is to calculate bitcoins by means of several graphics cards during continuous operation.

In order to counter the resulting high heat development and to operate as many graphics cards as possible in parallel, these GPU-Miner systems usually use very open casings (comparable to Benchtables) or, in some cases, adventurous, self-built case circuits. As with AMD CrossFire or NVIDIA SLI gaming PCs, not all PCI Express slots can be used on a system-based motherboard, since high-performance graphics cards generally have a wide dual fan or even three-fan fan And so the space required for additional GPUs is missing or must be moved with many Mining PCs all PCIe slots due to the respective graphics card constellation.

This is where the practical powered Riser Card comes in and allows the installation of PCI Express slots with x1, x4, x8 or x16 connectivity on the motherboard by allowing an additional PCI Express x16 slot to be strategic In or outside the casing. This x16 slot is electrically connected to a single PCI Express lane, which corresponds to the PCIe generation of the output slot. Since only calculations are performed by the GPU in bitcoin mining and, in contrast to video games, no textures or shader data have to be transported into the graphics memory, the bandwidth available for this application is sufficient.

For data transmission, the riser card is a USB 3.0 cable, which allows a considerable amount of room for the PCIe slot to be installed with a length of approximately 600 millimeters. In contrast to the often used IDE flat ribbon cables used in conventional riser cards, the module can be installed better and there are further advantages in the higher stability as well as the less impeded airflow. The power supply to the board is provided by a 6-pin PCI Express connector directly from the power supply, which is capable of providing up to 75 watts of electrical power normally supplied by the motherboard's PCIe slot. Compared to Molex plugs and adapters, this type of power supply ensures a lower transition resistance and is therefore particularly stable and extremely reliable. The remaining energy required by the graphic card comes as usual from other PCIe connectors directly connected to the GPU. With this powered riser, it is thus possible to operate up to 6 graphics cards on a mainboard without overloading the power supply or the cables of the power supply.