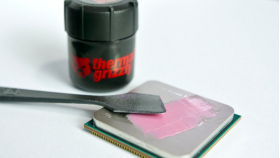 Thermal Grizzly Kryonaut Extreme is based on our well known Kryonaut paste. For Kryonaut Extreme the maximum thermal conductivity was accomplished due to the smallest particle size, thinner minimum layer height and improved low temperature application.

Thermal Grizzly Kryonaut Extreme is an extremely high performance thermal grease, which shows it’s true capabilities in cryogenic enviroments such as extreme overclocking with liquid nitrogen. Addtional electrically non-conductive aluminiumoxide nano particles and improved application evolved Kryonaut Extreme to our new high-end product. In cooperation with leading engineers and pro-overclockers Thermal Grizzly made sure Kryonaut Extreme works in ambient application such as water cooling as well as with extreme overclocking such as liquid nitrogen.