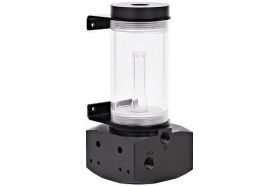 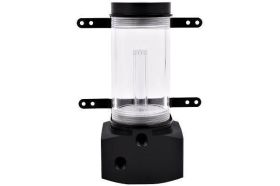 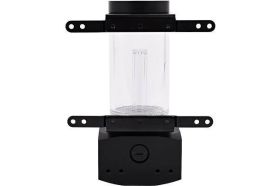 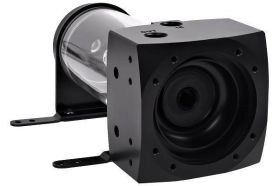 The Eisbecher Series consist of 20 different reservoirs that differ between usage, measurement and appearance. There are ten reservoirs within this series that consist of 99% plexi - totally unique! But the main difference between these reservoirs is within the functionality of the different sockets.

Bubble Down
It is placed at the bottom of the reservoir to prevent turbulences that could lead air into the watercircle.

Lighttower Standpipe
The "Lighttower" effect creates an astounding visual experience within every watercooling system. The Eisbecher supports this in two different ways: fluid coming from the bottom and coming from the top. The water is being led through the standpipe to the bottom or to the top where it splashes out of eight evenly distributed holes at the end of the pipe to the inner wall of the reservoir. This special watergame is the so called "Lighttower" effect.

Stand
The known feet from the "Eisdecken" find its very way even to the Eisbecher and sustain every combination with a solid stand.

Mountings
There are two mountings placed above and under the pipe for fastening the lot in the casing. The holes in this mounting have a spacing of a 120/140 cooling fan.You can reduce the width of the mountings up to the width of the reservoir and there are three M4 threads availaible per mounting for fastening if you would rather not mount the reservoir at the fan space. These mountings are easily removeable especially when not being used. You will find these mountings on all 20 reservoirs.

Lighting module
The lighting modules consist of plexi and enable the lighting with a 5mm LED. These modules can be installed into all 1/4" holes. They are being used in the lid and occasionally in the socket of the reservoir. This facilitates a unique way to your personalised lighting effects.

Material
All models of the reservoir are availaible in acetal and plexi. So there is something for everone.

This Eisbecher is the older brother of the DDC version. The pump is being mounted with a mounting ring that holds the pump with eight screws. You can use four LEDs that are hidden within the socke of the pump for the lighting of the plexi version. The lighting of the top is fascilitated through the lighting module. Standpipe and Bubble Down both do an excellent job in this model as well. The fastening happens through either the mountings or through the bases that are included in the delivery. There are even threads in the socket of the pump should there be a free space at the 3,5" drive bay (pump decoupling with M4 inner thread and outer thread needed - Art. 52007).