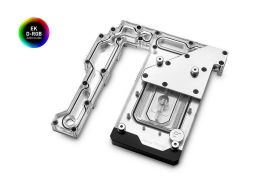 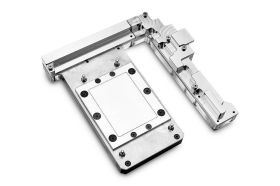 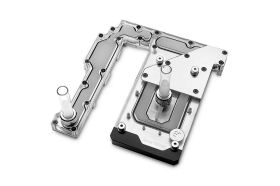 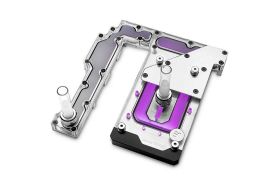 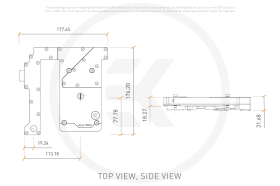 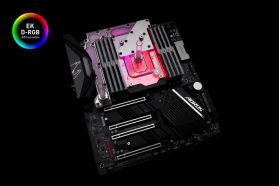 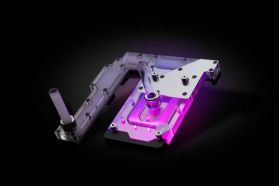 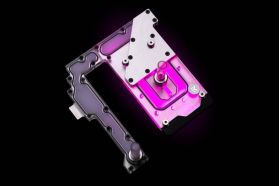 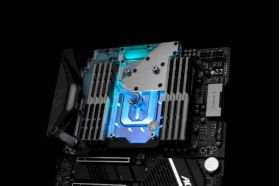 This TRX40 platform-based monoblock also comes with a bigger redesigned cold plate. The new design ensures the monoblock has mechanical contact with the entire 3rd Gen Ryzen™ Threadripper™ processor IHS, thus enabling better thermal transfer. The base of the monoblock is CNC-milled of the purest electrolytic copper while the top is machined the same way out of high-quality glass-like cast acrylic. The main nickel plated mounting screws and brass screw-in standoffs are pre-installed, making the installation process quick and easy. The cold-plate features 91 micro-fins that span across all chiplets within AMD’s CPU, thus ensuring proper cooling for each of them, at all times, even when certain cores work in Turbo mode. It covers the critical components under the I/O cover, such as the additional VRM components and the dual network chips, with active cooling. At the same time, the factory I/O cover is fully compatible with this motherboard cooling solution.

The bottom of the water block features a CNC milled black anodized cover that houses the addressable D-RGB LED strip and also has the function of hiding the unwanted LED hotspots. Unlike other solutions on the market, this is a true one-piece, sturdy and reliable liquid cooling product that requires only two connector fittings for proper operation. The bottom left Out port is carefully placed to be on the exact same height as the EK-Quantum Vector GPU block with an EK-Quantum Torque 90° angled fitting installed to it. This makes the tube routing very clean and simple, using just one piece of tubing bent at an angle od 90° to connect it with the GPU block. 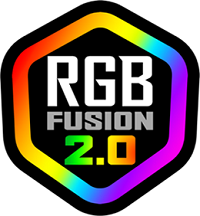 The enclosed thermal pad is used on voltage regulator modules to improve the cooling performance of the water block. For the CPU please use the enclosed (electrically non-conductive) thermal grease EK-TIM Ectotherm.