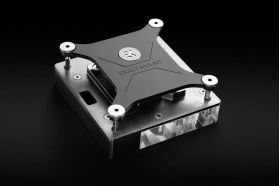 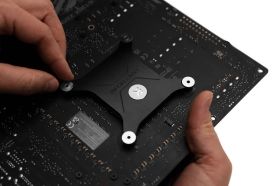 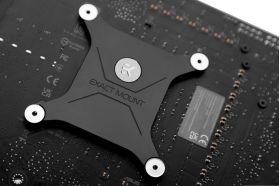 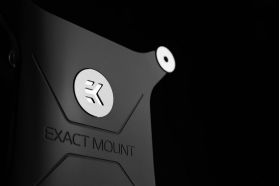 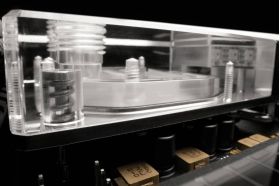 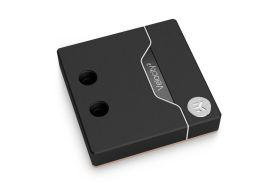 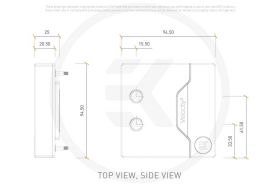 EK-Quantum Velocity² D-RGB - 1200 Copper + Acetal is the new high-performance premium quality CPU water block for the Intel® socket LGA 1200-based platform. It features a next-generation cooling engine that is socket-specific. This CPU water block is EK-Matrix7 compliant and is mounted via a patent-pending EK Exact Mount system.

EK-Quantum Velocity² series CPU water blocks embed the next generation cooling engine named OptiFlow. They use a specific combination of mounting pressure and coldplate geometry tailored for the IHS and die layout of Intel LGA 1200 socket processors. Low hydraulic flow restriction enables these products to be used in setups using weaker water pumps or lower pump speeds for added silent operation, while still achieving top performance! Thе lathe-turned coldplate is made with precision to effectively cover the IHS and put pressure on the die area.

The Velocity² series water blocks cover the entirety of the socket while conforming to Intel guidelines about safe zones.

The coldplate is manufactured out of the highest-grade 99.99% pure electrolytic copper, machined with precision for the best possible contact and heat transfer. This version of the water block features a cold plate with a CNC-machined black POM acetal top piece.

The EK-Quantum Velocity² is an EK-Matrix7 compatible product. The EK-Matrix7, a product raster that is bound to set a new standard. EK is adding a new dimension to PC liquid cooling, where the height of products and the distance between ports are managed by increments of 7mm. This improves product alignment and reduces the time spent planning the loop and bending tubes. Through the meticulous planning of our products, building a liquid-cooled PC becomes easy and fun, just like toy bricks.

EK-Exact Mount is a patent-pending mounting system designed and engineered by EK in the search for an easy-to-use, but aesthetically pleasing mounting mechanism. It's made up of only three pieces - backplate, mounting screws, and the water block itself. It's screwed in from the back allowing for a seamless and clean front aesthetic without any screws disrupting the harmony of shape. The system uses pre-tensioned springs concealed in the water block top, so with just a few turns of the thumb-nuts, the installation is finished, and you get the exact mounting pressure needed.

This product is compatible with all popular addressable RGB sync technologies from all major motherboard manufacturers. The arrow marking on the 3-pin D-RGB LED connector is to be aligned with the +5V marking on the D-RGB header. 14 addressable RGB LEDs are hidden under the stick-out piece, which acts as a diffuser.