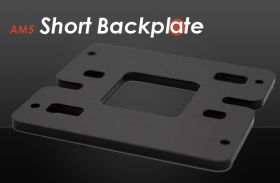 The AM5 Short Backplate is a shortened mounting plate that replaces the original AM5 backplate. Some CPU coolers compatible with the AM4 socket use a custom retention kit for mounting. Since the AM4 backplate is primarily used for mounting coolers, omitting this backplate is generally not a problem.

However, with the AM5 socket, the Socket Actuation Mechanism (SAM) is also screwed on via the backplate and cannot simply be omitted. In order to use an AM4-compatible cooler with a custom retention kit, you need an alternative holder for the mainboard's SAM.

This is where the AM5 Short Backplate comes into play and serves as a mounting plate for the mainboard's SAM. This extends the cooler compatibility to a wide range of CPU coolers. To protect against short circuits, the anodised aluminium plate is additionally covered with an insulating layer of polycarbonate.