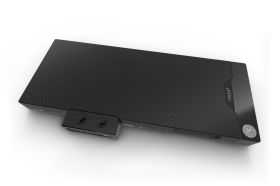 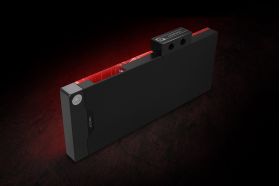 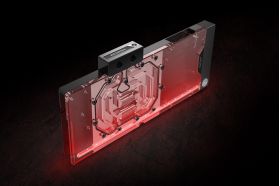 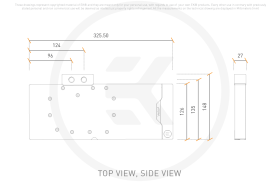 The new Red Devil RX 7900 XTX GPUs have GCD that is manufactured in a cutting edge 5nm process, allowing 54% improvement of performance per watt. While the GPU is efficient, it does still use more power than the previous generation. At 355W total board power that is packed in a smaller package than ever, with 300mm² GCD that contains 165% more transistors per mm² than the previous generation. Overall these GPUs feature 58 billion transistors for 61 TFLOPs of performance.

What differs from all other Vector² water blocks is that the cooling engine has been rotated by 90°, so the fins are perpendicular to the die. For optimal delta, the coolant flows over the graphics core die first, and the memory cache die after. Consequently, all MCDs get the same temperature coolant.

Matrix7 standardizes the dimensions of the products, including the port position and spacing, making liquid cooling loop assembly more intuitive and easier. EK-Quantum Vector² GPU cooling enclosures follow the EK-Matrix7 standard, making them seamlessly integrate with EK-Quantum Reflection² distribution plates. This brings compatibility with the EK vertical GPU mount l perfect alignment of ports in both horizontal and vertical positions, meaning less time used for planning of the loop, bending tubes, and the end result will still be an epic build.

The backplate improves your graphics cards' overall aesthetics and provides additional passive cooling for the backside of the printed circuit board VRM, core, and VRAM sections.

Sleek magnetic covers are used to conceal the terminal screws, allowing the branding to rotate when the GPU water block enclosures are inverted in the case or used on a vertical GPU mount.