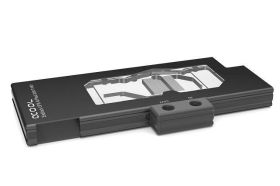 The world-renowned manufacturer, Alphacool, offers the Eisblock GPX a very noble and high-quality full cover water cooler for your graphics card. The Eisblock GPX is available in two versions; An eye-catching version with a plexiglass window with RGB lighting to really show off or a simple but elegant version made of acetal.

Both coolers are based on an identical copper heat sink, which is completely nickel-plated. The surface area where the water flows is very large, so that all components that give off heat are actively cooled with water which increases performance. The 35 fins of the cooler are only 0.6 mm thick and cover even large GPUs completely. The large cooling surface is also ideal for graphics cards with HBM memory.

Backplates for both cooler variants are included, but they differ significantly. The acetal version uses a classic backplate coated with fins for better cooling. The plexi version of the Eisblock GPX water cooler uses a smooth backplate, which together with the cooler encloses the entire PCB. This makes the cooler and graphics card look like a single unit rather than a front and back plate. The SLI connector on Nvidia graphics cards is protected by a screwed cap, which can be removed if necessary.

The optical highlight of the Plexi variant, besides the very large window, of course also the complete and integrated RGB lighting. This is compatible with ASUS Aurora Sync, Biostar VIVID LED DJ, Gigabyte RGB Fusion or MSI Mystic. But pay attention to the connection on your mainboard. You may need a Male-to-Female adapter for some motherboards.

With the Alphacool EisBlock GPX full cover water cooler for your graphics card you get a high-quality cooler with excellent cooling performance. You have the choice between a simple but noble black acetal version or a striking, wonderfully illuminated and chic plexi version with a large viewing window.