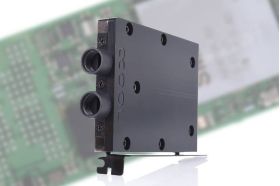 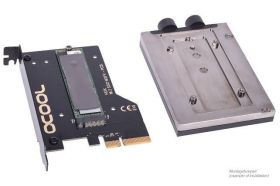 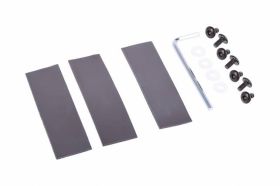 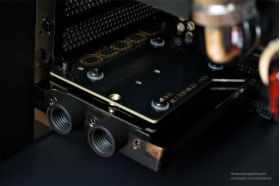 The Alphacool Eisblock HDX-3 water block offers the best cooling for your M.2 SSD. The included PCIe card, on which the water block is mounted, also provides your SSD with an outstanding bandwidth of up to 3900 MB/s.

The Alphacool Eisblock HDX-3 water block offers outstanding cooling for your M.2 SSD. Continuous, substantial data transfer dramatically lowers the performance of an M.2 SSD without cooling and can actually drop performance down to as little as 10% of its actual capability. Transferring large amounts of data heats up the memory controller and chips until a safety mechanism kicks in and severely throttles the SSD’s performance. This can be countered by actively cooling the SSD. After developing the HDX M.2 water block for motherboards with M.2 slots and the passively-cooled HDX-2 PCIe water block, Alphacool has gone one step further with the Eisblock HDX-3 to offer a water cooling solution to this problem.

The M.2 SSD is screwed onto a PCIe card and then mounted onto the water block. The water block itself is made of nickel-plated copper with a screwed-on acetal lid. Water in the block flows over the entire SSD and ensures optimal heat transfer away from the M.2 SSD. Using the G1/4” connectors, the water block can be attached to any standard water cooling loop.

The PCIe card is plugged into a 4xPCIe slot and screwed onto the case. With it, data can be transferred at speeds of up to 3900 MB/s. This is a much faster bandwidth than most SSDs can even use. That’s a 600% improvement over conventional 2.5” SATA-SSDs, since the maximum bandwidth for those is 640 MB/s. Even compared to motherboard slots, the plug-in card combined with the water block still offers substantially higher transfer rates. M.2 SSDs on motherboards are often only plugged into a 2xPCIe slot, which halves the maximum data transfer rate. It is also difficult to properly cool an M.2 SSD on a motherboard, since the graphics card is generally mounted directly above or below it and tends to significantly heat up the surrounding area.

With the Alphacool Eisblock HDX-3, you can avoid all these problems and get the best performance from your M.2 SSD.