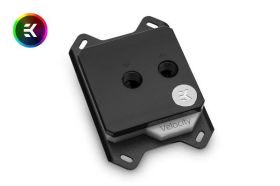 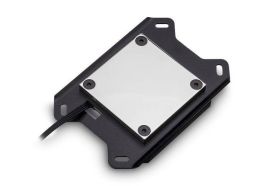 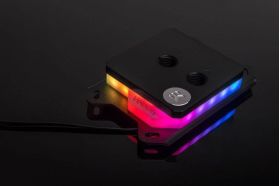 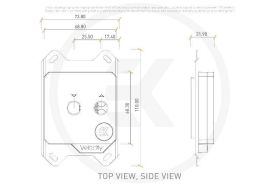 EK-Velocity AMD is the new high-performance flagship premium quality CPU water block for modern AMD processors. It features a fresh design that will enable a vast number of variations and options for enthusiasts and demanding users as well!

EK® Velocity series CPU water blocks embed the 5th generation of the award-winning EK® CPU water block cooling engine, further tweaked for performance and optimal coolant flow! Low hydraulic flow restriction enables this product to be used in setups using weaker water pumps or lower pump speeds for added silent operation, while still achieving top performance! The water block also comes with the most sophisticated RGB lightning implementation on the market to this day. A total of 24 LEDs are housed under the aesthetic shroud which connects to a standard 3-pin 5V D-RGB header. 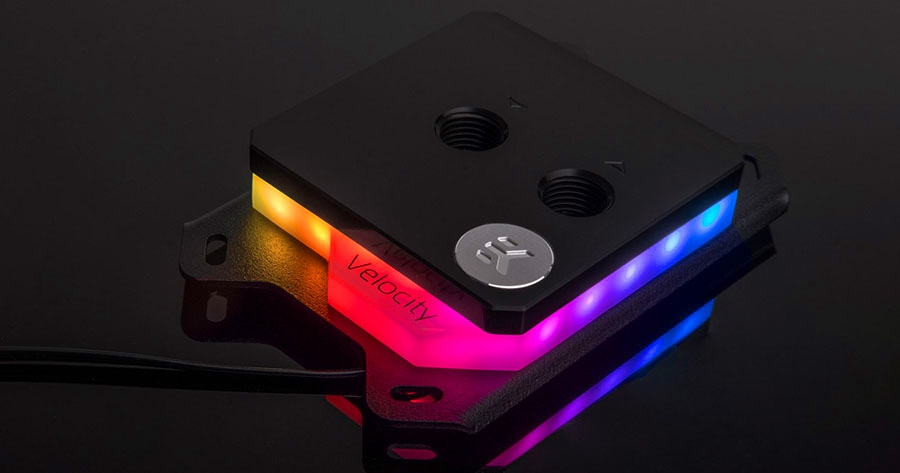 The purest copper available on the market is used for the EK-Velocity cold plate which is precisely machined to a dense micro-fin structure. The contact surface itself is machine polished for a better contact with the CPU IHS. This version of the water block features a nickel-plated cold plate with a CNC machined black POM Acetal top piece.

The new cooling engine is characterized by the top-integrated jet nozzle which is combined with a thicker jet plate allowing a more precise bow control. The simplified water block structure offers a more optimized coolant flow and easier maintenance.

The block is equipped with a reinforced hold-down bracket, and the enclosed mounting kit includes all the necessary mounting screws, mounting springs, an AMD AM4 backplate, rubber backplate gasket and a small tube of Thermal Grizzly Hydronaut high-performance thermal paste. The EK-Velocity CPU water block features a universal mounting mechanism that offers error-preventing, tool-less installation supporting AMD AM4 sockets out of the box. The mounting screws are streamlined and are even smaller than before for an added aesthetical perfection.

This product is compatible with all popular RGB sync technologies from all major motherboard manufacturers. The arrow marking on the 3-pin LED connector is to be aligned with the +5V marking on the RGB header.

i would like to be harder on it but i feel most of my woe's stem from asus and not actually ek having frantically googled my issue.

the block looks really nice works fine as a block but the D-rgb has been quite a frustrating thing to get working right (i'm currently thinking of getting the regular rgb replacement part and putting that on when i do maintanence).

the issue is it's somewhat possesed, controlled via the asus software it barely works most of the time half working as you'd expect and half freezing, stuttering dooing what ever it want's. i've tried an alternative program which sync's all my rgb but a single led will turn off and on, then multiple will start strobing, sometimes they randomly change to a color and freeze there (and neither jacknet nor armory crate can get it unstuck). when not using an asus board i'm guessing this block is a 5 star worthy block but on a asus board the d-rgb will drive you mad.