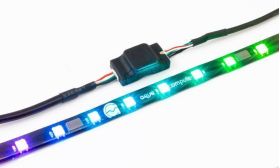 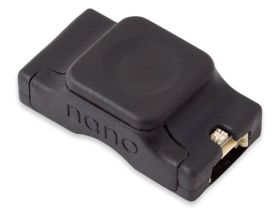 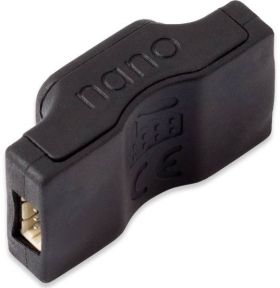 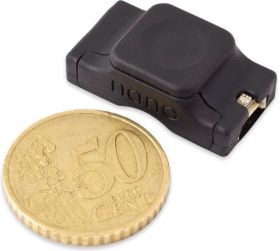 The "farbwerk nano" is a powerful RGB effect controller for up to 90 addressable LEDs, compatible to the Aqua Computer RGBpx product line. RGBpx controller for up to 90 addressable LEDs The farbwerk nano can control up to 90 addressable LEDs independently. Color and brightness can be individually controlled for each LED. In total, up to 20 groups of LEDs of varying size can be configured, and visual effects can be assigned to each group. The 23 available effects can be extensively adjusted for further customization. Many effects can also be configured to modify effect parameters (for example speed) depending on current sensor data. The available effects also include sound-to-light effects, visualizing computer sound output. The AMBIENTpx effect deserves special notice, replicating the border area of the current monitor display on connected LEDs, allowing for an impressive background lighting surrounding the monitor. Each of the 20 configured effect controller can be assigned to multiple areas of the connected LEDs up to a total of 60 assignments combined - perfectly suited to illuminate multiple fans identically for example.  Transparency and effect overlay Additional to defining colors, transparency can be defined in the effect controllers of the farbwerk nano. If multiple transparent effects are defined for a LED or a range of LEDs, the result will be an overlay of the assigned colors. Profile management An extensive profile management can be used to switch effectively between different configurations. Four profiles are available, the configured effects (and areas of LEDs respectively) can be freely assigned to each of the profiles. The active profile can be set manually or automatically depending on sensor values or depending on applications currently running on the PC. For example, distinctive lighting settings can easily be configured for office use and gaming, with automatic activation of the gaming setting the moment the game is stated. As sensor values, the integrated ambient brighness sensor of the farbwerk nano controller as well as sensor data from the Aqua Computer Hardware Monitoring is available, enabling automatic profile selection depending on CPU load or CPU temperature for example.  Autonomous operation The farbwerk nano is an autonomous device with an embedded micro processor and can be operated without a PC. The configuration is stored in the device itself, a multitude of functions can be used without connection to a PC.  Compatible with third party LED products Alternatively to the LED strips offered by Aqua Computer, LED fans made by Corsair and NZXT can be connected using the optional accessory RGBpx Splitty4 (item code 53267, not included in delivery). Technical details - Controller for addressable LEDs - one channels for up to 90 LEDs - 20 configurable effect controllers - four configurable profile settings - intelligent Button with three functions: strip on/off, change profile, adjust brightness - ambient brightness sensor - 16 software sensors for transmitting sensor values from the PC to the device - USB 2.0 interface - power supply input 5 V DC via USB, max. current 0.5/2 Amps (configurable) Scope of delivery 1x farbwerk nano 1x RGBpx LED strip 32 cm, width 10 mm, 15 addressable LEDs 1x RGBpx cable, length 50 cm 1x internal USB cable (5 pins), length approx. 1 m 4x cable clip, black 1x manual System requirements - Windows 8.1 or newer - Internal USB 2.0 port Demonstration video Notes on the AMBIENTpx effect Screen content preventing analysis by DRM or similar methods cannot be utilized for the effect. Notes on the aquasuite software: This product contains a non-expiring license for the active version of the aquasuite software at the time of device activation and update service for a period of at least six months. Please note that an internet connection is required for the installation and activation of the software. Further information about the licensing and activation of the aquasuite software can be found here.