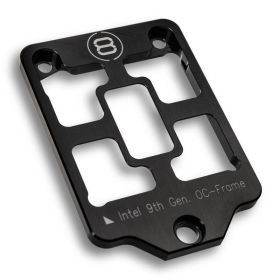 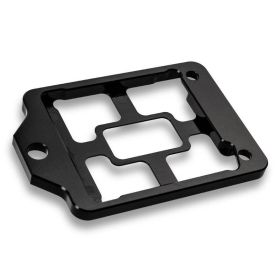 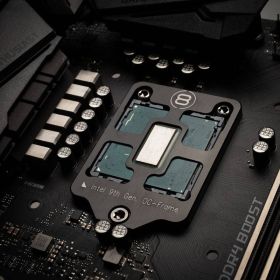 The der8auer 9th gen. OC-Frame replaces the Intel ILM (Integrated Loading Mechanism) on the motherboard, opening up completely new possibilities for extreme overclockers to professionally overclock their CPUs, with a processor cooler that does not interfere with the Integrated Heat Spreader (IHS) directly on the chip CPU can be installed.

German Engineered Perfection - Developed by overclocking world champion der8auer
Roman "der8auer" Hartung (pronounced "the farmer") is a studied mechatronics engineer (B.Eng.), Hardware enthusiast and professional overclocker from Germany. He has been active in the extreme overclocking scene for many years and has set countless groundbreaking world records during this time. He is always keen to tease out the last drop of power from any high-end hardware.

Overclocking to the limit
Since 2004, Intel uses so-called LGA (Land Grid Array) as a connection system for mounting its processors on the respective motherboards. The latter accommodate the connection pins previously mounted on the underside of the CPU and have since been found on Intel CPUs only as flat contact surfaces. To ensure that an Intel processor can still be safely fixed in the socket, it is usually clamped on the integrated heatspreader (IHS) by a hinged frame. This nickel-plated copper heat spreader forwards the waste heat of the chip to the CPU cooler. However, this is not very efficient and is overwhelmed in strong overclocking with the heat dissipation.

So that such a CPU can be sufficiently cooled even with pronounced overclocking, enthusiasts unceremoniously disconnect the heatspreader with the der8auer Delid-Die-Mate 2 (FSD8-019), which can reduce the CPU temperature by several valuable degrees. However, this dangerous crafting tact has the consequence that the sensitive silicon Die or other now exposed components of the headed CPU in the cooler mounting can be easily damaged. The der8auer 9th gene. OC-Frame provides a remedy and makes it possible to install the CPU cooler directly and safely on the chip itself.

The outer edge of the 8 ohm OC frame is only about 0.1 mm below the silicon chip itself, effectively protecting the latter from tilting of the CPU cooler and hence damage. The black anodized coating also isolates the aluminum of the OC frame, which makes it no longer electrically conductive. As a result, the 9th gene OC frame can safely rest on the upper contacts of the CPU. For mounting, the socket holder (retention module) of the Intel socket must be removed and the OC frame is screwed with the original screws to the standard backplate of the mainboard.

Warning: Removing the CPU heatspreader and the mainboard socket holder (retention module) is at your own risk and is always accompanied by the complete loss of the manufacturer's warranty and warranty!

Compatibility Note: Without the built-in heatspreader, the mounting height of the CPU cooler will be slightly reduced, which means that those with an unalterable mounting height can no longer be mounted. It is therefore essential to check before installation that the cooler to be used can also be used at a lower mounting height.